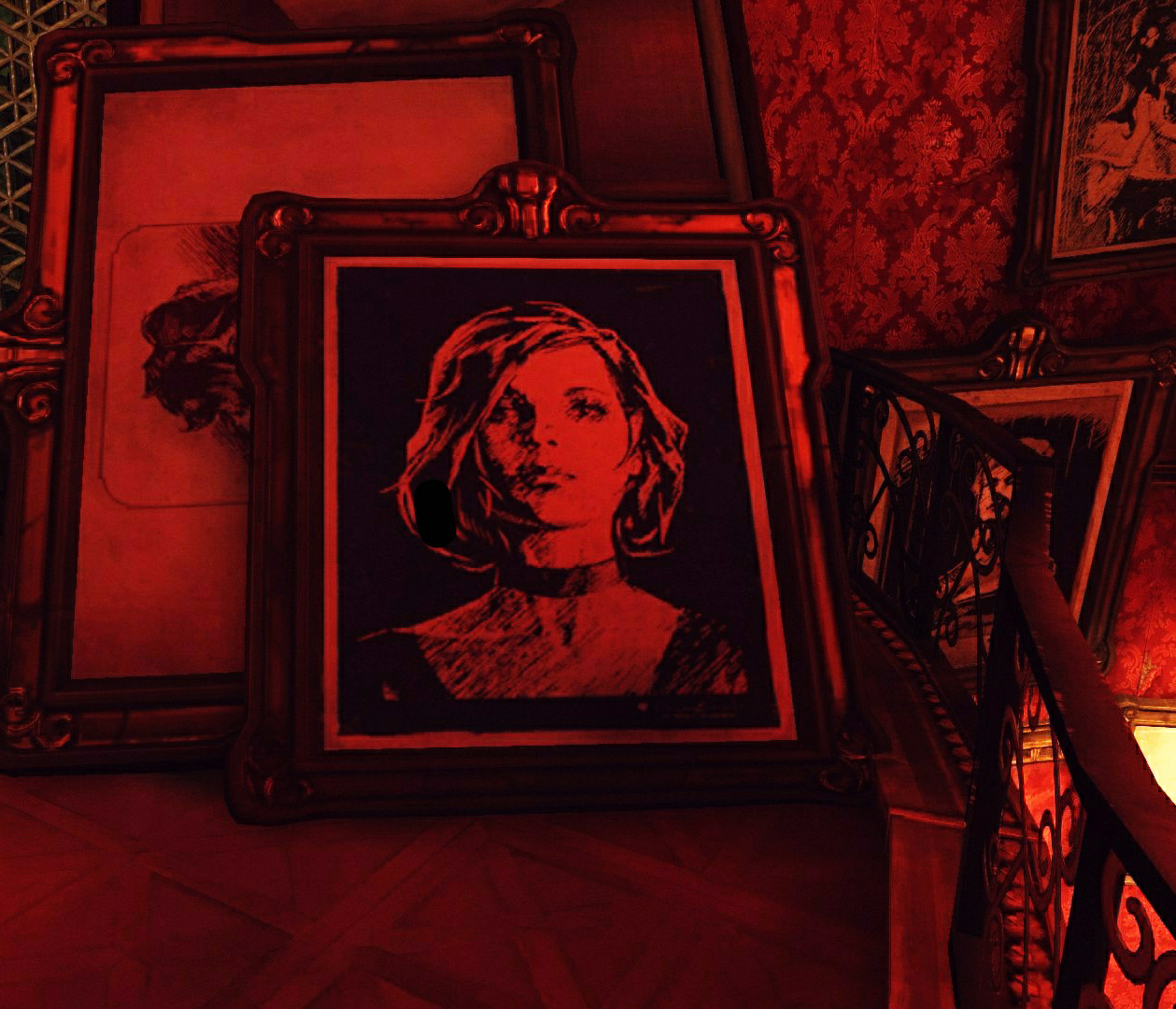 After neutralising the High Overseer, Corvo's next targets are his co-conspirator Treavor Pendleton's two older brothers, Custis and Morgan. By eliminating these two Pendletons, the one remaining will be entitled to their votes in parliament to use for the Loyalists' purposes. It provides an insight into Dunwall gentry and how even voting influence is retained in powerful families like land or wealth. This is also the mission in which Corvo will rescue Emily, who is being kept in the same location.

The elder Pendleton brothers can be found in their frequent haunt, The Golden Cat, which is a ritzy brothel not far from the Abbey headquarters. In Dunwall, the buildings containing the tools of law enforcement and those designed for the excesses of the wealthy are nestled closely together.

You actually start with a small quest where you have to investigate the Weepers in the sewers under the Hound Pits pub. These are Dishonored’s version of zombies, people who have had the plague too long and are in an advanced state of infection. Their reason and sense of self has eroded and they will attack you on sight. It is a neat way to show how the dangers afoot in Dunwall are nearer than you thought, closing in around your little safe space – which later on will become even more dangerous. Eventually you set out for the Distillery District's docks again, beginning at the same area you started the previous mission. This is common in the series and helps give the feel of Dunwall (and later Karnaca) being one contiguous world as opposed to discrete video game levels.

The way it recontextualises a familiar place is echoed in the wider level, as you go back to John Clavering Boulevard and even Dr. Galvani’s offices. It is the first example of something that the Dishonored games are very good at, which is reusing assets in a way that gives a fresh experience and encourages the player to engage differently to how they did before.

Even if you went straight down the boulevard in the last mission, you might not want to this time. Not only have the guards set up a watchtower to blow up any wrong’uns what cross their path, but there is even less resistance on the path off to the right as you disembark. You’ll find that the Bottle Street gang are welcoming and want you to talk to their leader, Slackjaw. The only real danger on this route is from Daud’s assassins, which are now in play, and a few Weepers. It is almost as if by reusing a map, they can progress the story by introducing these new enemies and situations without there being too much going on for the player to deal with.

It is also an early demonstration of Corvo’s ability to quickly re-traverse familiar areas, building into the sense of mastery a Blink-enabled player can experience once they know a level well. It makes for a nice funneling process as you travel from the open waterfront, through the imposing boulevard to the more cramped fork that leads to Holger Square and the Golden Cat, and ultimately to the Cat itself which is enclosed.

It is well worth taking the time to explore the Golden Cat, to get a different perspective on Dunwall society. You'll see guards sleeping on the job and find Slackjaw's art dealer mark engaging in electroshock treatment for titillation, while people starve across the street. The Campbell mission presented Dunwall's fortified law enforcement and militarised technology at its most regimented and authoritarian. Meanwhile the interior of the Golden Cat shows a side of the city that will become just as familiar. The furnishings are opulent but you will witness the entitlement, vindictiveness and weak morals of the nobility.

If you do talk to Slackjaw, you will be able to complete a couple of side missions for him. The first is retrieving an audiograph from an informant of his who has been killed, which gets you a hotel key providing a route to the Cat, and subsequently getting a safe combination from an art dealer at the brothel. Doing so results in the mission's non-lethal route, where Slackjaw will actually deal with the Pendletons himself, having them mutilated and put to work in their own silver mines. Again, a quick death would have been kinder. Outside of just running up and stabbing them, Corvo's more violent options are reminiscent of a Hitman game. One Pendleton can be unsuspectingly boiled alive as he enjoys a steam, while you burst in on the other as he's being a scumbag to one of the Cat’s working women. If you've snuck past everyone, you can take him out before jumping out of the window into the river as chaos explodes behind you, which is very satisfying. The way these levels are set up so that you can carefully plan, stealthily get to a target, but then just as you complete your objective end up running for your life in wonderful Benny Hill –like chases through the streets and round staircases just never gets old.

Meanwhile you can overhear the courtesans discussing Emily, and will be able to rescue her from an upstairs room - which you can sneak or murder your way up to, or if you've come via the hotel using Slackjaw's key you'll set eyes on the Cat's upper floors almost immediately and be able to Blink across to it. Fortunately Emily will wait for you as you complete your other objectives if her room is the first place you go. A notable side-story that starts to pay off here is Emily's paintings, which will be optimistic and colourful if you've been playing Low Chaos, and a bit darker and more like a Korn album cover if you've been violent.

You get a pretty indelible image of Dunwall with these early levels focusing around this one chunk of town. Guards out front using deadly force. Gang in charge of the distillery a.k.a. the source of the district’s income and identity. Ordinary citizens hiding, abused by guards or suffering from plague. The levers of power off to the left arbitrating the law and people’s faiths, the 1% of society off to the right in the brothel. This revisit to the game, and the time spent in the Distillery District and its environs in the early levels, brought home how confidently and efficiently the designers sketched out what sort of place Dunwall is, and how its society functions.

Non-lethal solution:
Head to the distillery and talk to Slackjaw
Shock the art dealer at the Golden Cat until he gives you the safe code
Bring this to Slackjaw (and don't aggro/ kill him or his gang members) 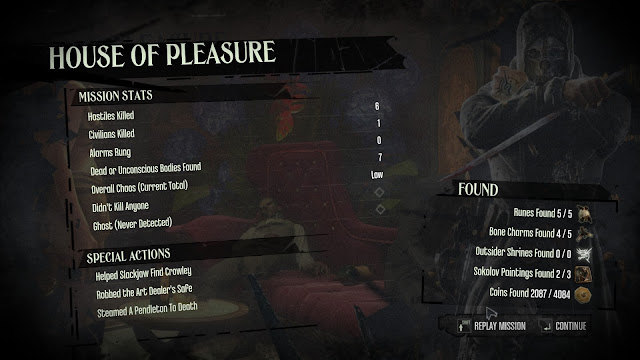 Popular posts from this blog

Dishonored Death of the Outsider: Mission 3, The Bank Job

March 30, 2021
The Bank Job is Death of the Outsider's centrepiece and maybe its most famous level. Having cased the joint in Follow the Ink, Billie is ready to break in and steal the only weapon capable of killing the outsider. She leaves Daud aboard The Dreadful Wale, sat on deck in the spot where Billie, as Meagan Foster, once conspired with Aramis Stilton and Emily Kaldwin to take down Luca Abele . Then it's off to the Dolores Michaels Bank, already sighted and possibly visited during Follow the Ink , for a mission that recalls the classic First City Bank and Trust from Thief II. The choice to re-use the entirety of the map from Follow the Ink, right down to the same black market (featuring a new shopkeep if you robbed it on the previous visit) has the effect of arming you with environmental knowledge and being comfortable with traversal, so you can approach the bank with confidence. This reminded me of Thief II also - a brace of late-game missions literally called 'Casing the Joint&#
Post a Comment
Read more

Dishonored 2: Mission 9, "Death to the Empress"

January 07, 2021
Dishonored 2's final level's central message is not subtle. At the beginning of the game you descended from a great height, perhaps as a whirlwind of vengeful bloodshed, perhaps as a shadow flitting from doorway to doorway. Now you'll climb back to where you started, and again the choice of violence or evasion is yours. You might find your playstyle causes you to consider how your approach has changed. Did you take care to avoid casualties when leaving Dunwall, only to have found by your return that the most straightforward route to victory really does lie along a blade? Did you leave bodies in your wake before, but come to shun collateral damage after seeing how much misery had already been allowed to build up throughout the Empire of the Isles during the Kaldwins' reign? Death to the Empress actually contains a version of the map for A Long Day in Dunwall as well as a new rendering of the Return to the Tower map from the original game. On this visit the tower and su
Post a Comment
Read more

August 28, 2020
"Welcome to the final mystery, Jindosh." The Clockwork Mansion is the point at which Dishonored 2's level design goes from being simply magnificent in scope, detail and intricacy, to being also conceptually awe-inspiring. Lady Boyle's Last Party is very clever - this is very clever and an engineering marvel on the part of the developers. While still retaining all the opportunities for different avenues of ingress, exploration and optional side activities, this mission eventually draws aside the curtain to reveal a central conceit both unforgettable and ingeniously disruptive to the playstyle you might have been developing. The very structure of Jindosh's residence will move around you as you pass through it, and although the concept is kind of given away in the mission's name there is no preparing for how impressive this is and how it informs the way you'll engage with this environment. Having rescued (or eliminated) Dr. Hypatia, the protagonist and
1 comment
Read more